Introducing the 2017 Name of the Year Bracket 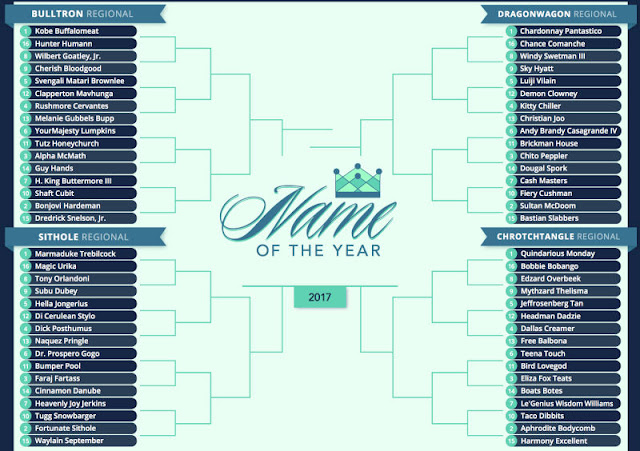 Names are serious business.
Want proof? Look at the 2016 election. Donald Trump’s original family name, Drumpf, stuck as a derisive nickname after John Oliver dredged it up for a late-night bit. Meanwhile, Hillary Clinton ran into trouble of her own thanks to scores of voters who recoiled at the sound of her surname. The connotation of Clinton carried so much weight during the election that, in its endorsement of the Democratic candidate, the New York Times felt compelled to speak directly to voters who would judge her based on the moniker she adopted after she married her husband. It targeted its appeal toward “those of you who are hesitating to vote for Mrs. Clinton — because you are reluctant to vote for a Democrat, or for another Clinton, or for a candidate who might appear, on the surface, not to offer change from an establishment that seems indifferent and a political system that seems broken.”
I’m not discussing the heft of these names to shoehorn politics into the yearly distraction we provide, but rather to remind our voters-to-be that names carry a powerful legacy. Each person’s choices leave indelible marks on the words they bear as their own, and for family members, progeny, and even completely unrelated people, the effects can be massive — perhaps even massive enough to alter an entire nation’s political landscape.
But enough of that. We both know why you’re here. Let’s talk about Kobe Buffalomeat.
Mr. Buffalomeat, an Illinois State University football recruit and Bulltron Regional one-seed, has a name that tells two disparate stories. In one, a gifted basketball player brings a new association to the name of a Japanese city and the famous beef it exports, inspiring thousands of parents along the way. In the other, a name stands for the history of the native tribes of the Great Plains. “Having the name Buffalomeat probably hasn’t always been easy,” Mr. Buffalomeat’s aunt Penny Postoak Ferguson told the Chicago Tribune.“But it makes me proud for our heritage.”
Through an offensive lineman from Kansas, those two lineages have formed a beautiful union, and as a result, young Kobe has been able to add new chapters to the tales of his first and last names. A NOTY championship would bring further fanfare to the histories of his handles.
To earn that reward, he’ll have to outlast 63 other names that are all vying to cement their own onomastic legacies. Some naminees, such as Dragonwagon Regional eight-seed Windy Swetman III, speak of multiple generations of breezy perspirers. Others, like Chrotchtangle Regional ten-seed Taco Dibbits, reveal a culture clash between a common Dutch name and a beloved Mexican foodstuff. Some names even remind us of the legacy created by our own enterprise. Godfrey Sithole is so revered among the NOTY High Committee that one of our four regions is named after him; now, in 2017, it is another Sithole, a truly Fortunate Sithole indeed, who will try to bust his way through Godfrey’s bracket to reach the Final Four.
Which name will add a glorious victory to its legacy? That, my friends, will be up to you. We will post matchups over at our website, and you will decide them. The best way to learn about these matchups as we post them will be by following us on Twitter. Ultimately, only one contender will remain. Will it be YourMajesty, King, or Sultan? Gogo or Bobango? Guy, Sky, Fiery, or Di? Choose wisely—the future depends on it.
Posted by stw at 8:36 PM