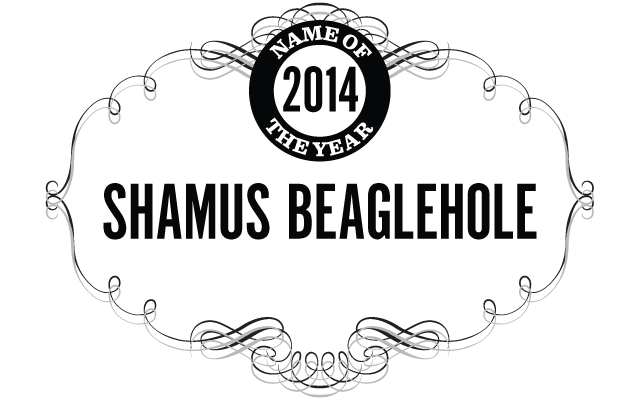 Shamus Beaglehole is the 2014 Name of the Year. Here's to you, Shamus.

Let's recap the Chesterfield footballer's meteoric rise through the Sithole regional and beyond. He breezed past Wubbo Ockels in the first round of the tourney. He stomped Jazzmar Clax in the second. Sweet Sixteen: Diesel Daigle went down hard. All fine and good -- seeded at #3, all these wins were to be expected.

But the next two matches put Mr. Beaglehole on the map as a kingslayer. The Sithole final pitted him against top-seeded Dr. Loki Skylizard, whom he dispatched by a margin of 300 votes. Next came another one seed, Bulltron champ Curvaceous Bass, who also fell to Shamus. After running this gauntlet, the final round against Chrotchtangle upstart Chillie Poon was child's play. If David took out two Goliaths, he might be this impressive.

Some of you singled out Beaglehole as a winner from the very beginning. Others grumbled in the comments throughout the tournament about the injustices wrought by misguided voters. To this we say: good. It means you care about this entirely frivolous venture as much as we do, which warms the cockles of the High Committee's hearts.

As an answer to those grumbles and to our own, we have a mechanism for compensating for the mistakes of the hoi polloi -- every year, the NOTY High Committee picks its own winner, and both the People's Champion and the Committee's favorite go down on the books. This is necessary in cases like 2010, in which the people unconscionably sent fellow soccer star Steele Sidebottom to the top -- passing over the sublime Nohjay Nimpson, who the High C saw fit to canonize. Other times, the people and the High Committee achieve concordance: 2011 saw Dr. Taco B.M. Monster claim the hearts and minds of everyone who glanced at a bracket that year.

So without further ado, our pick for the 2014 Name of the Year is... also Shamus Beaglehole! By a landslide, actually, which is really going to cheese off his detractors among the commentariat, but there's really nothing more you can ask of that name. Our full scoreboard is below.
That concludes this year's silliness. It's been fun. Thanks to everyone for reading, voting, nominating and commenting. Keep the nominations coming at nameoftheyear@gmail.com so we can keep this train rolling.
Posted by tom at 11:03 AM