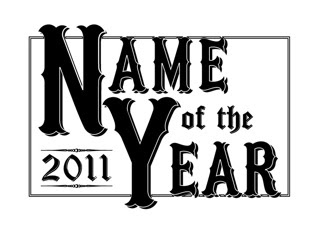 Flag us for delay of game. We won't stomp around like Ndamukong Suh (whose name, while not NOTY worthy, does mean "house of spears" in the dialect of his father's ancestral tribe, which is pretty cool). We will accept our five yards with humility and a pledge to do better next year, meaning this year.

Introducing your 2011 Name of the Year finalists...

Out of the Bulltron Region, he was arrested in November 2010 in connection with a string of bank robberies around Orlando, just 19 years old, standing five feet ten (in one sock) and weighing 155 pounds, according to his mug shot, from Leesburg, Fla., a No. 2 seed, Courvoisier Winetavius "Crime Tyme" Richardson.

And from the Netherlands, more specifically the Department of Social Pharmacy and Pharmacoepidemiology, Groningen University Institute for Drug Exploration (GUIDE), Groningen, The Netherlands, or at least at the time of publication of "The impact of antihypertensive drug groups on urinary albumin excretion in a non-diabetic population" by the British Pharmacological Society, or maybe he's now at the Department of Clinical Epidemiology, Aarhus University Hospital, Aarhus and Aalborg, Denmark, with whom he was affiliated at the time of publication of "Antidepressants and risk of first-time hospitalization for myocardial infarction: A population-based case-control study," he's also a No. 2 seed, out of the Dragonwagon Region, his name might be "perfectly normal" in Dutch, but we're not Dutch, Taco B.M. Monster.

Thank you for your continued support. Vote.