NOTY reader Joshua emailed us to say that Dragonwagon Regional No. 2 seed stonegarden grindlife had been his teaching assistant in a political science class at UCLA. Josh maintained that grindlife should be removed from the ballot because

"he was born with a normal name and changed it to stonegarden grindlife himself when he was in his 20's because he's an ultra liberal hippie and wanted a name that was as bizarre and alternative as possible. (he briefed us all on this when we first showed up for class because 'What's up with your name?' is obviously the first question students have when we first see that he's our TA)"

Sorry, Josh. Legal is good enough for us. We even have a name for this policy, the Dragonwagon Doctrine, after the Hall of Name member honored in stonegarden's region, 1993 NOTY Crescent Dragonwagon. 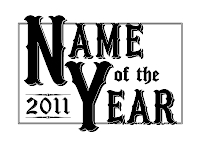 The doctrine is upheld here in the bottom of the Bulltron with No. 15 Shalom Dreampeace Compost, a government analyst in Santa Cruz, Calif. In this fantastic story about the glut of 1960s and '70s hippie-ish name-changers in that lefty town, Compost explained in 2002 that Shalom was a birth name. But his given surname was Rich.

"It stood for something I didn’t believe in," he said. "Being rich."

Well, it also can mean "having high value or quality" or "full and mellow in tone and quality" or "meaningful, significant." But let's not harsh the buzz. Go on.

"For me, choosing the name Compost was choosing a lifestyle more in harmony with the planet Earth," he said. "Rich not only stood for material wealth but was a common first name and just seemed to cause a lot of confusion in my life."

Principle and expedience, all in one. Compost "notified everyone he knew and all the people he did business with that he was 'Compost' from now on. At the Department of Motor Vehicles, he just filled out the new name on the forms in 1976."

"It has generally been an empowering experience, having a name that is something I believe in."

Probably also a bit of a pain in the ass. Two votes below. And don't forget to follow us on Twitter @NOTYtourney.

No. 15 Shalom Dreampeace Compost: See above.