A Word from the NOTY Committee 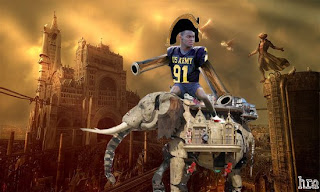 1. Final Four balloting ends in approximately 24 hours. The vote to determine the 2009 Name of the Year (People's Division) will begin on Monday.

2. We strongly suspect voting irregularities in both Final Four matches. And we regret not having invited the Carter Center to observe the process from the outset. But it's too late now. We see no recourse but to let the outcomes stand. We failed to take preventive measures until after the ballot boxes apparently had been stuffed. For that, we apologize.

3. Even if we threw out the 7,000 or so votes for Barkevious Mingo that may have been registered either by someone in with way too much time on his hands or a computer proxy, the Lord of Mingovia would still be leading Nutritious Love by 1,000 votes. In any case, Tennessee -- apparent home of the URL reloader -- is dead to us.

4. Iris Macadangdang's current 13-1 margin in Michigan and the total number of reported votes there appear aberrational, even if she is a Wolverine. We fear that Velvet Milkman is getting jobbed. So attention people of Kentucky (that’s where Murray State is, right?): You have one day to rally support for your six-time Ohio Valley Conference champion women’s golf coach and husband of economics professor Martin Milkman. Get to work.

5. Several people have asked why a name disappeared from the original ballot. Because we received a request to remove it, and we’re reasonable people, that’s why.

6. We're not sure why we numbered our paragraphs, but we did.

Thanks again to Every Day Should Be Saturday for another brilliant Mingovian image.
Posted by stefan at 11:37 PM