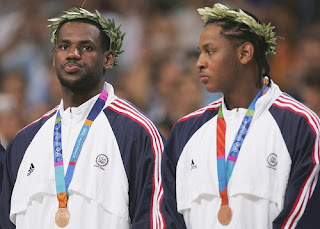 Not without reason has the consolation game gone the way of the short short and the set shot and the flannel uni and the single-bar facemask. After failing to win the big prize, the competitors have had enough. They'd just as soon pack up their things and get back to their daily lives. Another game? You've got to be kidding. Fans are just playing along, too. This promises to be one of the most desultory contests we've ever witnessed yet we will watch out of warped loyalty to you whom we don't know personally! The Olympics manage to get around this problem, sort of, by handing out dun-colored medals. But, believe us, the players aren't fooled. We saw the U.S. men "win" the bronze at the Athens Games in 2004. Tim Duncan would have rather been watching rhythmic gymnastics. Hell, he would have rather been competing in rhythmic gymnastics.

And yet we love the third-place game the way we love the short short and the flannel uni and the single-bar facemask -- especially the single-bar facemask: for its throwbackness, to a time when we cared (maybe) a little bit more about the spirit of competition and the glory of the fight (or at least to a time when marketeers hadn't figured out that no one gave a shit). Not to date ourselves or anything, but our favorite third-place game was the 1979 NCAA consolation between Penn and DePaul. Penn had just, um, lost to Michigan State by a score of 101-67. It wasn't as close as the score indicates. The Quakers trailed 31-6 and 50-17. The defeat was, obviously, utterly humiliating, even if Magic Johnson was the primary perpetrator. But Penn was required to return to play DePaul for no absolutely no good reason. They lost in overtime, 96-93. But who cared? The game was a happy reminder that an Ivy League team had made it to the Final Four, and a way to recover from the annihilation by Michigan State. Two years later, the NCAA ditched the third-place game.

As the lines to cast a ballot in the 2009 NOTY Final snake around the block -- the Mingovians and Macadangdangians are locked in an epic battle -- we decided to heed the call of at least one commenter and revive the tradition of the pointless consolation. Vote carefully, People. Absolutely nothing is on the line.