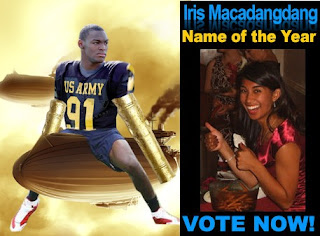 One is a high-profile football recruit, the other a modest political science/Spanish major. One is from the South, the other from up North. They represent big conferences – the SEC and the Big Ten – but what else would you expect for the final of a tournament with a field of 64? Both have powerful grassroots interweb advocacy groups.

Bulltron Regional No. 4 seed Barkevious Mingo has been the force of the 2009 NOTY Tournament, racking up the biggest margins and – ahem – biggest vote totals so far. We are already on record as backers of the West Monroe, La., native, incoming LSU linebacker and Steampunk Emperor of the Kingdom of Mingovia. His name is a going-both-ways thing of beauty. Barkevious rallies the base not from us, however, but via the many proclamations issued on his behalf by puppetmaster Orson Swindle of the college-football blog Every Day Should Be Saturday.

Chrotchtangle Regional No. 1 seed Iris Macadangdang has been derided by some as an unworthy finalist. But her indigeneous Filipino name – not especially common, she tells us in an email sent to correct some facts we lifted from an outdated bio – is undeniably mellifluous, and paired with her old-school first name qualifies for NOTY greatness. The 2008 Michigan grad from Kalamazoo is by all accounts a lovely person. She even dabbles in ballroom dancing! (Yo, Dancing With the Stars . You love football players. How about a Mingo-Macadangdang tandem next season?) Iris draws online support from her acolytes at MGoBlog – and a Facebook group organized by her friends.

Cast your ballot. Voting continues through next Monday, April 27.