Spaceman Africa Is the 2008 Name of the Year (People's Division) 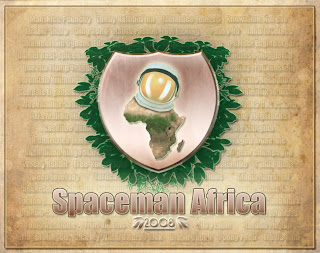 When they weren't accusing us of backing another candidate—which we were, because this election doesn't require a team of observers from The Carter Center—Spaceman Africa's friends brought a grammatically challenged, Marley-inflected, peace-out, Burning Man vibe to the 2008 Name of the Year Tournament. By which we are amused and for which we are grateful.

sings us a toon Spaceman

Your turning many stones in a world of large rocks. Who would think that a name change could generate such a wide following of souls.

Nice one, me Harp Brutha!

Spaceman thanks for the patatas!

Hi ya Spaceman it's Mary I'm in Thailand and you got my vote! If the CT crew could see you now!

Go Spaceman. I still have fond memories of us on the playstation and looking out the window at Beirut

Heya Spacey, thanks for prawn curries in Goa, hit the spot every time!

Congratulations, Spacedisciples, Spaceman Africa is the (popularly elected) 2008 Name of the Year. We raise a Fosters to the champion and his acolytes from Bombay to Brisbane to Bora-Bora. With a surge in the final days of balloting, the Bulltron Regional No. 10 seed captured 55 percent of the vote and a resounding 658-538 victory over Chrotchtangle Regional No. 9 seed Fonda Dicks.

While we nakedly championed Destiny Frankenstein, the NOTY High Committee's selection as Name of the Year, we don't dislike Spaceman Africa as much as his sycophants think. The Dragonwagon Doctrine—named for 1993 NOTY and inaugural-class Hall of Name member Crescent Dragonwagon—firmly establishes that a legal name change is a legal name change. Don't forget: Of more than 300 nominees, we put Spaceman on the ballot.

From what we've gathered in the comments, Spaceman Africa is Australian. His friend Crazy Horse Invincible may have been joking when he told a reporter the pair picked new names during a post-soccer match bender. He was a Hare Krishna. He travels the world on philanthropic missions. He likes to party. He's a ladies' man. He spreads joy.

His name? Funny, yes, and better than a dick joke. Our gripe was and remains the absence of unintentional comedy, irony or jaw-dropping wonder. As we've said before, after a quarter century spent gathering, assessing and debating names, we have a refined sense of what constitutes greatness. Among the 2008 nominees, we thought Reprobatus Bibbs was great. We thought Alpacino Beauchamp was great. We thought Jeremiah Kilimanjaro was great. We thought Free-King Africa—another made-up name, by the way—was great. And, of course, we thought our girl Destiny was the greatest of them all.

But the people have spoken. Spaceman Africa is the 2008 Name of the Year. Clang-a-lang, clang-a-lang.

Thanks to everyone who voted, and commented. Don't forget to submit nominations for 2009 at nameoftheyear@gmail.com. We're well over 50 already, including Infinite McCloud, Uranus Golden, Winer Hyppolite, Maxim Dinka, Demetrius Dick and Sequan Nevels (teammates of Jeremiah Kilimanjaro!), Barkevious Mingo and Telephone Mtoko.

Special thanks to the incomporable 289 for the championship plaque.
Posted by stefan at 3:03 PM