At the Induction Ceremony, We Will Surely Cry 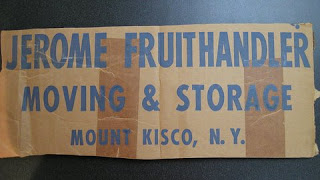 Please join us in welcoming three new members of the Hall of Name: Jerome Fruithandler, Delano Turnipseed and Princess Nocandy, who all demonstrate the naked power of food.

Jerome Fruithandler: The 2004 Name of the Year was, as the photo suggests, in the moving and storage business in Mount Kisco, N.Y. He also was a respected member of temple Bet Torah, where there's a memorial fund in his honor. Now, with HON votes from 10 of the 12 High Committee members (half are required for induction), we memorialize—no, immortalize—Jerome Fruithandler for the evocative imagery of his surname and its delicious contrast with an always tasty first name.

Delano Turnipseed: There was much joy among the High Committee when this 1985 NOTY nominee cracked open the door to the Hall of Name on his ninth attempt with seven votes. We stumbled across Turnipseed when he was a second-team All-City football player at Bishop McDevitt High School just outside of Philadelphia. He didn't win NOTY that year—the legendary Godfrey Sithole did—but he did tie for third in the Name of the Decade voting in 1992. While there are lots of Turnipseeds in this world, the juxtaposition of a presidential first name and an agrarian last name makes this one Hall-worthy.

Princess Nocandy: The 2006 Name of the Year squeaked in with the minimum six votes. We found her somewhere on the vast payroll New York City government—the High Commissioner is checking his records—and instantly fell in love with her gentle first name and Soup Nazi surname. Princess becomes just the fourth woman inducted into the HON.
Posted by stefan at 12:01 PM