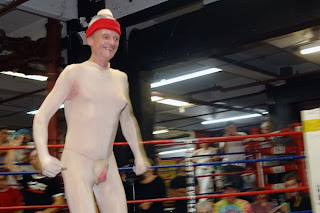 It's come down to this: an extra E, two dick jokes and a guy who keeps adding to an apparently already-formidable legend. Both Final Four matches are contained within this post. We know it's difficult, but please try to vote TWICE.

Yeah, we probably underseeded the Seton Hall women's basketball coach, who advanced out of the Sithole Regional. As for the much-beloved, globetrotting, Zelig-like party animal who followed through on a drunken pledge to change his name from whatever it was and then survived the greatest battle in NOTY history to emerge from the Bulltron Regional, what can we say that we haven’t said already? Shoulda been you, Destiny, shoulda been you. Photo of Mr. Mangina by Laurel Ptak via Gawker.
Posted by stefan at 9:54 PM