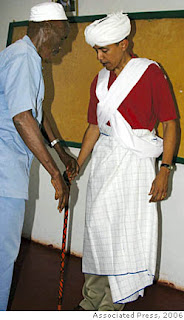 With wins in Texas and Ohio today, Barack Obama is almost certain to become the Trung Canidate for an office almost as important as mine, High Commissioner of NOTY.

Like many fans of Obama, I am worried about the inevitable name-related fear-mongering that Obama will face in a race against the milky-white moniker of John McCain. It rhymes with Osama! His middle name is Hussein!

But don’t panic, Barry. History is on your side. NOTY history.

For one score and five years, Muslim-sounding NOTY nominees have more than held their own against Apple Pie opponents.

2004: In what may be the most compelling reason for optimism in the Obama camp, Allah Mathematics (ninth place) defeats Clinton Dick (18th).