Let's Hope They're Packers Fans, Too 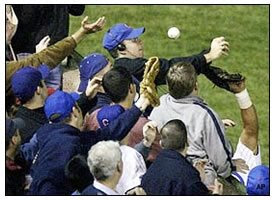 The riskiest thing about giving your kid a sports-related name is that sports are designed to let us down. Athletes aren’t heroes, they are fallible human beings. We watch them play and cheer and boo them wildly and genuflect at the altar of their physical gifts. But we really don’t know much about their underlying characters, and often find out too late. Some dad in Cincinnati in the 1970s proudly told his family and friends he was calling his new boy Pete or his little girl Rose because that No. 14 is a scrapper and a hustler. Every Kobe and Jordan and Barry and Wilt so named because of some irrational love for a man in a uniform—no doubt an O.J. or two was born in Buffalo circa 1972—couldn’t be blamed for changing his identity, or at least undergoing that procedure from Eternal Sunshine of the Spotless Mind to erase the grade-school memories of their parents cutely recounting how they named junior after their favorite sports hero.

Are buildings a safer bet?

We ask because a couple of Chicago Cubs fans with the last name of Fields have chosen to name their newborn boy after a baseball stadium. Yes, Wrigley Alexander Fields was born on Sept. 12 to Paul and Teri Fields of Michigan City, Ind. Sadly, they had planned ``for years’’ to name their kid after a place known for ``colorful'' fans in the bleachers and a century of losing. Also view-obstructing poles and this guy and Sammy Sosa. OK, and ivy on the outfield walls and an authenticity rivaled only by that ``lyric little bandbox’’ (read: claustrophobic dump) alongside I-90.

If the Cubs make the playoffs and win the World Series, the Fields will have quite a story to tell young Wrigley some day. And if they blow it again? If they never win? If Wrigley Field is replaced, as it will be someday, by a luxury-boxed, wide-concoursed, corporate-named—Oops! It already is!—stadium with replacement ivy, and the building’s obituary begins with the fact that its occupants were the biggest losers in the history of sports? Then what?

Thanks to NOTY friend Dan Shanoff.
Posted by stefan at 9:43 AM