We've been away. But, like Frosty the Snowman, we'll be back again some day. And we'd like to thank you, dear readers, for the many names you've continued to deposit in our inbox, which we'll get to soon enough. 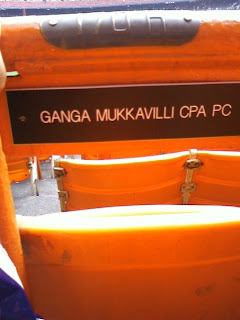 We've wanted to bring you the touching road stories of Canadian drunk driver Cash Dixon Ringo Starlight and Minnesota reckless driver Rarity Abdullah, who took his girlfriend and her four-month-old daughter for a ride on the hood of a speeding car. And we feel we have let you all down by failing to relate the heartwarming tale of little Tuesday Demargosian, whose grandfather held her photograph aloft at the San Diego ballyard to boldly--nay, defiantly--show support for an truly embattled icon. You stay classy, Barry Bonds.

Finally, since we love and encourage photographic validation, we'd like to recognize here NOTY's intrepid cellphone-camera correspondent, sports blogger Luke Halpert, who recently emailed us the above photo, which hails from the back of a box seat at Shea Stadium.

Ganga Mukkavilli. Break it down: Gang of Muck? Ganjaville? Any way you say it or parse it, it comes up strong. The only downside? A Mets fan.

Thanks to NOTY readers Jason, Roger, Goathair, Sean, Rich, Jason and Ryan.
Posted by stefan at 10:34 AM