Hell Is for Children 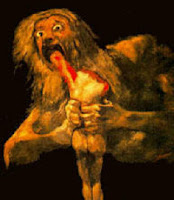 With a few notable exceptions—our favorite being the Rev. Canaan Banana, a former president of Zimbabwe—you just don’t see many NOTY-worthy names breaking into senior management. Sports, yes, of course. Batter up, Destiny Frankenstein! A life of crimes petty and other? Your parole hearing will begin now, Free-King Afrika! Some combination of the two? Do they play shirts and skins in the joint, Reprobatus Bibbs?

On this complex societal issue, we believe most adults can take care of themselves. But when a child is involved? Our maternal hackles hackle. Consider the sad tale of a 5-year-old Aussie boy named Max Hell.

Max’s dad, Alex, attempted to enroll the little hellian at St. Peter Apostle Primary School in Melbourne. But the motherfu-, we mean the fathers wouldn’t accept him. Because of his name.

Just a name, Alex? Is Beelzebub just a name? This is the Catholic Church! It can't afford its good reputation regarding children sullied by some sort of public-relations scandal!

Alex Hell offered to change the boy’s name to Wembridge, his mother’s maiden name. The priests liked that idea. Then Alex consulted the NOTY Help Line, where he was told in no uncertain terms that Max Hell is a better name than Wembridge Hell. Actually, Alex Hell decided that his name is his name—he's of Austrian heritage and the name means ``light’’ or ``bright’’—and the priests could go to it.

The school withdrew Max’s spot in the class. About nine million Google hits later, it reconsidered and Max apparently is back in.

We have no idea whether Max is attending St. Peter Apostle or not. We do want the Hells to know, however, that their son has been admitted without prejudice to the Name of the Year Class of 2008.
Posted by High C at 11:19 AM