You Talkin' To Me? Well, I'm the Only One Here. 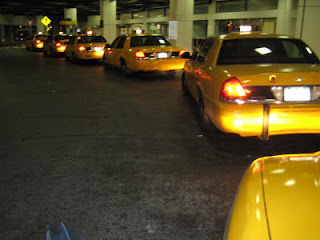 When NOTY reader Luke Halpert, a young New York sports blogger and regular Deadspin commenter with the handle Cooler Than Warm Milk, emailed us the name Jean-Pierre Pierre, we weren’t impressed. Cute, but in a brave new world populated by the likes of Reprobatus Bibbs, Dominitrix Johnson and Destiny Frankenstein it’s going to take a lot more than a Haitian double Pierre to get on the NOTY ballot. But Luke included a link, and we clicked through, and it was a photo that he had savvily shot with us in mind, and our hearts took a bumpy ride down the potholed streets of the city that never sleeps.

When we hop into a New York City taxicab, we do two things. We tell the driver our destination and we look at his hack’s license, not necessarily in that order. Because there is no bigger smile than glancing through the bulletproof plexiglass and seeing a quality name.

which at the time, when the cabbie's last name appeared atop the first, translated to Excellent Raymond:

The feeling could be described as that of a card player after being dealt a straight flush. Or going through a bin of old LPs at a garage sale, seeing the typical Rush and Laura Nyro records you've seen in a thousand other bins, when suddenly the Cornelius Brothers and Sister Rose album you've been looking for since 1982 appears.

We couldn’t agree more. Which is why we’ve always given the cabbie a good tip, and his onomastic due. NOTY and the modern cabbie grew up together in the 1990s. In the couple of decades before, the American-born, Brooklyn-accented, weakly named Jewish and Irish driver’s-seat raconteurs were gradually replaced by a new generation of immigrant dreamers from Haiti, Senegal, Nigeria, Russia and Pakistan, many with serious NOTY chops.

Excellent Raymond has been by far our biggest taxicab score. For TFH, it holds the where-were-you-when power of the Kennedy assassination or the first lunar landing. ``It was 5:30 AM,'' he writes, ``and I hailed the cab on West 89th Street b/t CPW and Columbus. I was going to Lower Broadway to shoot the victory parade from the first Iraq War.’’ (Editor’s note: We don’t think he’ll have to endure that assignment again.) Soon after, Excellent Raymond—you can’t say one without the other—was elected the 1992 NOTY and then joined the inaugural class of the Hall of Name. 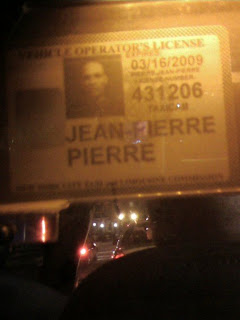 Naturally, other NYC cabbies have been nominated, too. There was Muhammad Muhammad. Diogenes Lopez. Innocent Adimeili. The appropriately named Hermon Hackshaw. And now Jean-Pierre Pierre.

Luke aka Cooler Than Warm Milk was cabbing it home from a Chinese restaurant near the Maritime Hotel in Chelsea when he realized who was driving. He was ``thinking that this was one of the great names of all time and about halfway through the cab ride I realized I should send this to you guys.'' For which we are eternally grateful.

That we don't love Pierre squared as much as Luke loves him is beside the point. What matters is the thrill Luke was lucky enought to experience. Because, sure, we could comb the New York City Taxi & Limousine Commission's registry of drivers. But nothing compares with the full-body frisson of a chance encounter in the back of a cab.

(Top photo courtesy of New York Hack, the blog of cabbie Melissa Plaut, author of the forthcoming Hack: How I Stopped Worrying About What to Do with My Life and Started Driving a Yellow Cab.)
Posted by stefan at 12:04 PM