She Is Not a Fronkensteen

We asked our good friend Big Daddy Drew of Kissing Suzy Kolber to give us the nuts and bolts on a lock No. 1 seed in the 2008 Name of the Year Tournament. Welcome to NOTY, Drew.

In your lifetime, you will never encounter a name as grossly incongruous as Destiny Frankenstein. Unless you know someone named Aphrodite Buttfungus, or Petunia Mudhole, or Diamond Shithog. This blog has taught us that isn’t out of the realm of possibility.

But Destiny Frankenstein is likely to remain one of the more ill-fitting names in human history. The Broken Arrow, Okla., native (bad John Woo movie alert!) was first discovered by the intrepid Will Leitch of Deadspin (who has name issues of his own; fucking Illinois bloodsucker). Destiny was an All-American shortstop for the Kansas Jayhawks softball team and played semi-pro softball last year for the National Pro Fastpitch champion New England Riptide. (Suggested slogan: ``They’ll pull you under!!!’’) She’s also a former academic All-American, a good Christian, a loyal teammate and by all accounts one heckuva nice person. Why, people should steal her brain! 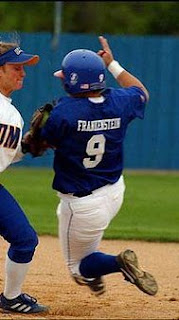 In reality, she should be named Janet Nicelady, or Lisa Lionheart, or something else that connotes her inherent goodness. That’s the name she deserves. Instead, she’s stuck with the preferred first name of a stripper trying to forge a new identity after fleeing an abusive fiancé, and the last name of an unhinged scientist willing to play God and stitch together dead body parts for the sake of his own legacy. It’s also the name of a really shitty Kenneth Branagh remake. And yes, her last name is pronounced that way. It just doesn’t seem fair.

Yet Destiny seems remarkably mature about having such a crummy moniker. In an interview with the Boston Globe last year, she said, ``Well, it helps you remember me.’’ You can say that again. It’s not often you come across a name that makes you shout out, ``Holy fucking shit, that’s a weird name!’’ Destiny has taken heckling from opposing fans with a grain of salt and even laughs when ``Monster Mash’’ is played for her PA music.

And I think there’s something to be learned in this. Destiny doesn’t seem to mind if you think she has a silly name. In fact, she gets a little kick out of it. How many 22-year-olds are this amicably self-deprecating? Not many. So here’s to you, Destiny. A very strong Name of the Year candidate, and a young woman worthy of recognition regardless of her patently ludicrous given name.

``I've learned to just have fun with it,’’ Frankenstein told the Globe. ``What's really cute is that kids don't know what Frankenstein is, so their parents will be laughing, and they'll be like, `huh?’ ’’

Yes, that’s children in New England for you. Undereducated and damn near brain dead. It seems Destiny Frankenstein will have the last laugh on them all.
Posted by stefan at 10:04 AM