Name of the Week Week 5, a joint effort of the High C and STW, features another battle of one-name wonders: Spicer Bell and Xzavie Jackson. Last week, Dominitrix Johnson spanked Marktwain Johnson to capture the crown. 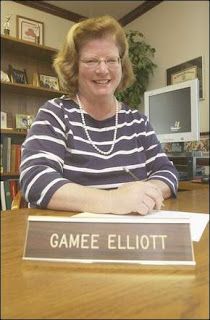 Spicer Bell: Ol’ Spice is executive director of the Community Foundation of the Eastern Shore, a philanthropic organization in Maryland. He’s also a former state school superintendent of the year.

At a time of prominent ethical transgressions, it’s great to have a solid citizen like Spicer competing for a spot on the 2008 NOTY ballot.

Spicer comes to us from one Jackie Jennings, a columnist for the Daily Times newspaper in Salisbury, Md., who wrote about names apparently because she regrets naming her daughter Andersen. Jackie says Spicer is a well-known family name in her parts. But as a first name, she writes, it ``may not have played so well in the Bronx.’’ Why not, oh white middle-class suburban newspaper columnist? Because people of color live in the scary, scary Bronx?

In any event, Spicer apparently isn’t a big fan of his name. ``I can't say that I loved it,’’ he says. We do. Spice-related names have titillated us since NOTY Committee Member White Moses, in a fit of pique over the nomination of people with common first names, years ago crafted the fictitious entrant Billy Joe Spicemonger.

That was topped—after the emergence of Hall of Name member Assumption Bulltron—by the invented Ecclesiastes Devildog. We also remain flattered (and impressed) by the 100 NFL names created by NOTY friend Big Daddy Drew of Kissing Suzy Kolber.

Photo explanation: It ran with the column about Spicer. Alas, apparently her name is pronounced Jamie.

Xzavie is a 287-pound, undrafted free-agent defensive end out of Missouri who’s in the Cincinnati Bengals’ training camp this week. SI.com football ``guru'' Peter King mentions Xzavie in one of his Word-Count-doesn’t-go-that-high, Andy Rooney/Larry King parody columns. (Also in there: Phil Leotardo, ``old friend’’ and CNN-firee Daryn Kagan, Barbaro, the Tampa Bay Devil Rays’ payroll and this: ``Coffeenerdness: I always chuckle when a fairly fit person in line at Starbucks will order a drink straddling the line of fit and fat. The other day, a woman said: `Grande skim triple mocha, extra mocha, extra whip.' Big cup of a light flavored coffee, loaded with extra sugar and extra heavy cream. What's the point, exactly?’’ Jesus.)

As for Xzavie being on the Bengals, King writes:

That's notable because there never has been a player in the history of American professional sports whose first or last name began with the letters ``xz.’’

How King is sure, we don’t know, because there are a lot of sports that people are paid to play, and Xzavier, a variant of Xavier, is sweeping the nation. A one-minute Interweb check yielded Syracuse QB Xzavier Gaines, Kansas State defensive tackle Xzavier Stewart, teen skateboarder Xzavier Walton and Baltimore algebra whiz Xzavier Cheaton.

Our friends at KSK would agree that King misses the point. Yes, the X-Z combo is cool. But what makes Xzavie great is that it doesn’t have an R at the end—on purpose—and the X and the Z are pronounced separately. Then there's the backstory. Xzavie's mom is named Princess, his dad is Harvey and his older sister is Zareth. As the Kansas City Star reported in 2003:

``My mom wanted some unusual letters in my name, too,’’ said Jackson, pronounced X-Zavie.

``So they took an X, took the Z out of my sister's name, and a couple of letters come from my daddy's name, the A and the V. They put the names together and threw some letters in there and came up with Xzavie.’’

Xzavie's full name is Xzavie Lee HeBron Jackson. Yes, his middle name is HeBron, which is, of course, Hebrew for LeBron.

Thanks to NOTY reader Jason.