Mackintosh Muggleton surprised the oddsmakers—but not the film critics—to win Name of the Week Week 6 in a close decision over Nigerian politician Goodluck Jonathan. This week, we're getting a bowl cut, pulling on our tie-dyed bellbottoms and breaking out the Hot Wheels with a couple of names that would have been sure hits in our 1970s elementary school.

Candy Graham: NOTY regrets to inform its readers of the untimely passing last week of Candy Graham of Fort Wayne, Ind. She was 74.

Candy was a successful businesswoman—a bank president in Bowling Green, Ohio—at a time when that surely wasn't easy. She was a board member of the Girl Scouts, business groups and art museums. She was president of the Salesian Club and went to church.

She was an upstanding citizen.

To whom other people, upon learning her name, no doubt had one universal reaction:

(Thanks to NOTY reader Polly.)

The 27-year-old right-handed relief pitcher was promoted to the big club last month by the Chicago Cubs. He went 1-1 with a 2.89 earned-run average in eight appearances before he was sent to Triple-A last week. (The Cubs organization, by the way, has its share of good names, including Felix Pie, Angel Pagan and Buck Coats.)

Yes, Rocky is our nominee's real name. As he told MLB.com: 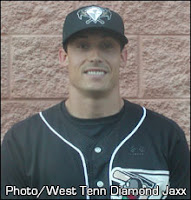 ``The funny story is that my dad's name is Pat and my uncle's name is Jan,'' Cherry said. ``They're both names that could be girl's names. When they grew up they got pretty tough because people were making fun of them.

``When I was born, my uncle's idea was, `Let's name him something tough,' like that song `A Boy Named Sue.' That's what they named me, and that's what on the birth certificate.''

Like that song ``A Boy Named Sue''? Huh? We read Johnny Cash's lyrics, and Rocky's right about the concept—``I give ya that name and I said goodbye/I knew you'd have to get tough or die''—but his experience is actually the opposite. He wasn't named Sue or Dana or Dolores. He was named Rocky. Two months after the release of Rocky II.

The MLB.com reporter then figured he'd throw Rocky a curve. Did he know that his name sounds like an ice-cream flavor? Haha!