To no one's surprise, Xzavie Jackson treated Spicer Bell like a living-room Scrabble player to capture Name of the Week Week 5. Facing off in Week 6: a child actor and a Nigerian politician. 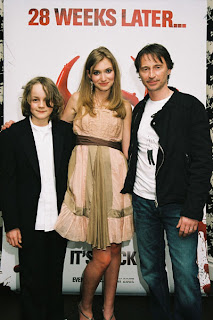 Mackintosh Muggleton: No gimmickry here. Just good old-fashioned fey British snootsiness. In American, Mackintosh Muggleton (the tyke on the far left) sounds like the name of a clownishly evil cartoon character. In English, it sounds like a parody of a caricature of a Victorian schoolboy. The Hogwarts School of Witchcraft and Wizardry meets Mary Poppins.

Mackintosh Muggleton—you can’t write one without the other—is a kid actor making his debut in 28 Weeks Later, in which post-apocalyptic flesh-eating zombies in London finish the work they started in 28 Days Later. Rolling Stone calls the movie ``a sequel that doesn’t suck.’’ Mackintosh Muggleton, the magazine says, plays his part ``without an ounce of bogus cuteness.’’

Some reviewers are even taking note of the high quality of Mackintosh Muggleton’s name. And that of his on-screen sister, the worthy Imogen Poots (above, middle). This is CNN:

We love that, when writing about things British, American writers use British-sounding words like ``splendid’’

(Thanks to NOTY readers Nate and David.) 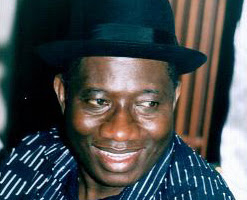 Goodluck Jonathan: We’ve always had a soft spot for the aesthetically pleasing name stylings of English-speaking sub-Saharan Africa. How can you not respect people whose parents have shunned bland Anglo appellations like Phil or Kevin and rolled the dice with names reflecting the rapture or mystery of birth, regardless of what the future might hold? What if Thankgod Amaefule turned out to be an atheist? If Laughter Chilembe were a manic depressive? If Have-a-Look Dube went blind? If Givemore Manuella didn't pay child support? Two of the 15 members of the Hall of Name reflect our love for this tradition: Excellent Raymond and Largest Agbejemison.

So far, Goodluck has been living up to his name. He's a state governor in Nigeria’s oil-rich south. In two weeks, he is to be sworn in as the country's vice president. He survived an apparent assassination attempt last month during elections marred by violence and accusations of fraud against his ruling People’s Democratic Party. Afterward, he ducked out of the country to visit Harvard ``to prepare him for the challenges ahead.’’

In a story about oil, corruption, violence and failed promise in Nigeria, the Baltimore Sun talked to Goodluck in December:

``Government is all about providing services to the people,'' Gov. Goodluck Jonathan of Bayelsa State, said as he relaxed on a sofa at his luxurious, marble-adorned official residence. ``That is our commitment. Any money that gets into our hands is for the people.''

(Thanks to NOTY reader Fritz.)