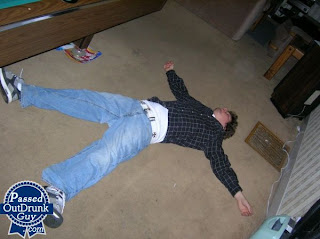 This just in to the NOTY Action News Newsroom:

A Missoula man allegedly broke into the home of a local couple early Thursday morning and tried to steal their stereo equipment, but was arrested after police found him asleep in the basement.

Later in the day, Iam Wright appeared in Missoula County Justice Court on felony charges of theft and burglary.

Iam Dork for falling asleep while breaking the law.

Police entered the woman's home and found Wright in the basement, lying on the floor with his eyes closed. He did not respond to the officers' commands until he was threatened with a Taser, at which point he complied with police.

Iam Smart for not getting Tasered.

Wright explained he was drunk and had passed out after a party at the residence, but the woman and her husband said they hadn't hosted a party.

All I need are some tasty waves, a cool buzz and Iam Fine.

What's more, the man was lying next to a black bag that belonged to the couple. It was filled with the couple's Bose stereo, a subwoofer, and the woman's backpack and wallet.

Wright faces possible penalties of 30 years in the Montana State Prison and fines of up to $100,000.

(Thanks to NOTY reader Adam.)
Posted by stefan at 1:18 PM