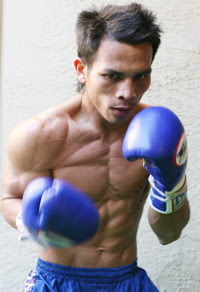 At NOTY, we’ve long believed that two things make a boxer great: a tough chin and a powerful name. When practitioners of the sweet science don’t have the former, they hit the canvas. When they lack the latter, they invent a predatory nickname. Think of Hawk, Gorilla, Macho Man (our beloved first NOTY), Iron Mike, the Rose of Soweto.

OK, maybe not the Rose of Soweto.

Terdsak—and we just won’t be able to type that enough—is a 25-year-old Thai featherweight with Mr. Universe deltoids and the (unnecessary) ornery nickname the Pit Bull. On his way to a 24-1 record, Terdsak dumped an NOTY-region worth of talent: Orlando Sitohang, Dondon Lapuz, Jaime Barcelona, Said Chiddy, Man Deuk Park, Pedro Malco. That earned Terdsak a date in Lake Tahoe last summer with former IBF and WBA champ Juan Manuel Marquez for the WBO interim title.

No contest, right? Terdsak is, well, Terdsak. Marquez? Pedestrian every way you slice it.

Marquez hammered Jandaeng with two more crippling right hands to the rib cage. Jandaeng froze for an instant and seemingly was stood up on his toes after Marquez connected with yet another galvanizing right uppercut to the face and a remorseless five-shot combination that thudded off of the Jandaeng's skull. Marquez jumped on his wounded opponent and nailed him with yet another ruthless five-punch combination to the head and body. Referee Nady had finally seen more than enough and he stepped between the two featherweights and waved off the butchery.

We figure Terdsak just couldn’t get it up for an opponent with such a weak name. So Terdsak's manager smartly booked his next bout against one Joebar Damosmog. Result: Terdsak on points.

We intended to end the post there. But then we checked out Joebar's opponents. Oh my goodness: