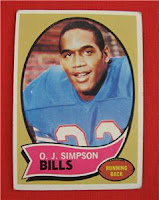 Paul Frankenstein assembled an All-Name Team from this weekend's NFL Draft. A few of his selections:

FB: Orenthal O’Neal, Arkansas State, Raiders. Last time there was a RB in the league named Orenthal, he did OK for himself.

DE: C.J. Ah You, Oklahoma, Bills. I know nothing about this guy, but I love his name.

ILB: Desmond Bishop, California, Packers. Not to be confused with Bishop Desmond Tutu.

The excellent Awful Announcing imagined this conversation between NFL football operations director Gene Washington and Buffalo Bills GM Marv Levy when the O.J.'s took C.J. Ah You in the seventh round:

Marv Levy: No. We want Ah You, from Oklahoma.

As others have noted: Lucius Pusey, sadly, was not drafted.
Posted by stefan at 12:30 PM