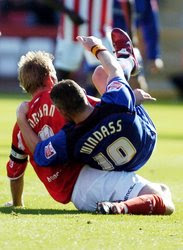 NOTY reader Adam from Minneapolis steered us, without comment, to a post on The Offside about unusual futbol names. Our eyes immediately were drawn to a link to the Guardian column about the subject, which we covered pretty extensively last week. So we fired off a rocket telling Adam to read NOTY more closely.

Readers, of course, are smarter than bloggers. And as we read The Offside post our eyes brightened.

My all-time favorite is Thankgod Amaefule [left], a Nigerian who played for the Greek side PAOK. I can only imagine his mother’s first words after she gave birth to her son. Thank God.

The Offside also nominated Englishman Dean Windass, who made news last fall when he went after the other side of an opponent.

Not content with having one of the most hilarious names in professional football, Windass grabbed Cheltenham’s John Finnigan by the sack during Bradford’s 2-1 win on Saturday.

The act ... resulted in Finnigan being sent off for retaliation when he raised his arm to Windass so he would release his grip.

``I suppose talking about Dean Windass gets his name in the paper and gives him 15 minutes of fame.''

The site also linked to the fabulous Brazil Name, which will turn you into a one-name Brazilian footballer. The NOTY Committee's Brazil Name names: 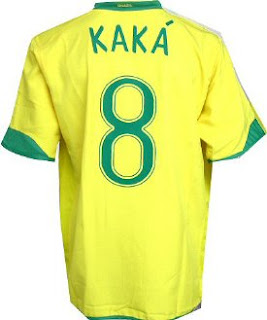 And a couple of our Brazilian NOTY nicknames: