Esteemed Members of the Name of the Year Committee:

I wish to submit Knowshon Moreno for Name of the Year consideration. Mr. Moreno is a tailback for the Georgia Bulldogs....

He doesn’t need to be. The 2005 New Jersey player of the year—dude ran for 6,268 yards, second most in state history—``achieved one-name status in the Shore Conference, a local version of Lance, Tiger or Michael.’’ The Asbury Park Press tracked down Knowshon’s grandmother, Mildred McQueen, for a name explanation:

``When I was pregnant with his mother I picked up the name Varashon from a character in a short story I was reading at the time,'' McQueen said. ``When Varashon had Knowshon, she just took part of her name and added the `Know' for knowledge.''

``If he keeps progressing, it is going to be tough to keep him from getting some totes next year.''

And some NOTY votes!

By the way, the Bulldogs are shaping up as an SEC name force. Knownshon is joined by Trinton Sturdivant (relation to 2007 NOTY 24th-place finisher Quantavius Sturdivant unclear) and NaDerris Ward.

Ynot Bubba: Sure to offend opponents of the Dragonwagon Doctrine, which stipulates that a legal name change is a legal NOTY name no matter how idiotic, Ynot Bubba emerged this month in New Mexico after a judge approved his name change. 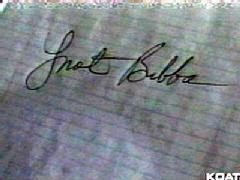 Ynot is 43 years old. He is a truck driver. His named used to be Justin Brady. He wanted to change it because, basically, he hates his life.

``I didn’t really have actual parents that I would consider parents,’’ he told KOAT Action 7 News in a video worth watching as much as anything else on the internets.

And the new name? The AP reported that:

His chosen first name, Ynot, comes from communities around the country named Wynot and Whynot. His last name is courtesy of the people he now considers family; they nicknamed him Bubba for no particular reason.

Ynot Bubba was the final choice among three names. He had considered Lacon Marlboro, inspired by the town of Lacon, Ala., and his preferred choice of cigarette. He also considered More Chek, from his desire for more money.

We love the way this guy thinks.