Given the Alternative, `Stubby' Was Probably a Good Call 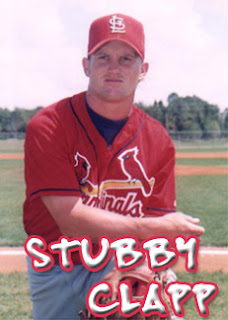 He's been discussed for years in many, many, many places, but after reading Deadspin today we felt compelled to file our own report on Stubby Clapp.

The minor-league baseball legend—and Canadian!—is being feted in Memphis this summer with his own ``day.'' But don't look for him on the 2008 NOTY ballot. Stubby is a childhood nickname.

It's Richard. Which means that he just as easily could have been called ... oh, never mind.

After an 11-year career that included a cup of coffee in the bigs, Stubby's finally hung up his spikes. Thankfully, he's staying in baseball. Though if you're an Astros fan, and the coaches look a little uncomfortable, the headline on Stubby's job announcement might explain why.
Posted by stefan at 2:16 PM