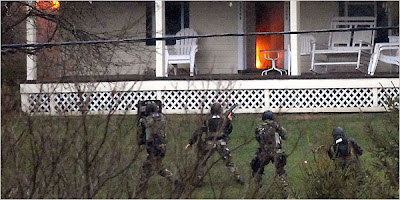 There’s absolutely nothing funny about a guy fatally shooting one state trooper and wounding two others and then dying in a blaze in a farmhouse during a gun battle with cops.

Unless the dead perp's name is Travis Trim.

And you’re familiar with the meaning of trim.

Travis Trim. It's a name that became new to us Tuesday when he allegedly shot a trooper during a traffic stop in Margaretville. But, his name is not new to some people in the North Country.

Capital News 9 sent a team of reporters to find them.

The 23-year-old has a P.O. Box in the hamlet of North Lawrence in St. Lawrence County, so we attempted to contact his family members by calling people in the area with the name Trim.

Like Eddie Murphy in 48 Hours, they wanted to get some Trim.

SUNY Canton students we spoke with said Trim is the talk of campus.

From our experience, trim is the talk of pretty much every campus.
Posted by stefan at 9:55 PM