Actual Fox News Headline: `It’s Not Easy Being a Dick' 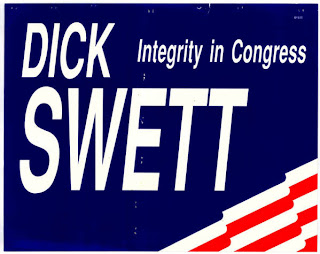 When I was in college in the late 80’s, my friends and I were, in a mildly psychedelic state, cruising the rural back roads of southern New Hampshire when we stumbled across a 9-foot-wide campaign sign for [wannabe] Congressman Dick Swett in the middle of nowhere. We quickly sprung from our vehicle to examine the sign up close, and soon decided that for the best possible review, we would be best bringing it back to our lab/dorm and mounting it on our wall for all to ponder. Having Dick Swett on our wall is one of my fondest college memories.

Dick Swett, a Democrat, won that House race in 1990 and was re-elected in 1992. He lost in 1994 and lost a Senate bid two years later. According to Wikipedia,

On the night of the election, in what may have been the most famous moment of his political career, many American media networks falsely projected that Swett had won.

We think Dan Rather just wanted to say his name a lot.

Anyway, Swett has been hearing it forever. And he’s fed up. He was quoted in a Fox News story about a debate over public-library Internet filters blocking websites containing names like Dick and Dickens and Hancock and Sussex and Essex and Couples.

``This is something I've had to contend with my whole life,'' the New Hampshire resident said wearily. ``Why should I be penalized if the rest of the world's mind is in the gutter?''

Perhaps because ``dick'' has been slang for ``penis'' since at least 1891 and people still choose it as a nickname for Richard?
Posted by stefan at 12:06 PM