You're With Me, Yetta 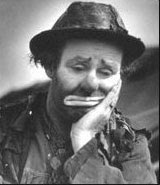 Last year, baby-name ``wizard’’ Laura Wattenberg picked what she called a ``Name of the Year.’’ Let’s leave aside for now the legal implications of appropriating our 24-year-old brand name (Editor: We're kidding) and break down the Final Fours of the competing tournaments.

--Emmett. Like the clown? No, Wattenberg means like ``Emmett Smith,’’ the ``retired football star.’’ Great! Except it's Emmitt Smith. Wattenberg writes: ``[S]o who cares that you set the all-time NFL rushing record? You're nobody til you're a reality tv star.’’ That sound? Us stabbing ourselves in the eye with a fork.

--Miley. Some kid actor on a cable show we’ve never heard of apparently has this dopey name. Wattenberg says it’s ``a natural extension of Riley, Kiley et al.’’ Mom, dad, this is Piley. I mean Tiley. Filey? Qiley? Hold on, that last one’s kind of cool.

--Addison. Not much to make fun of here, expert Wattenberg's endorsement on the grounds that Addison is—here we go again—the name of someone who appears on television, in this case a fake someone. Big name for 2007: Turtle.

--Shiloh. Tabloid celebrities saddle kid with name of Civil War battle in which 3,482 killed, 19,102 wounded, and 3,844 captured or missing. Why not Antietam? My Lai? Normandy? Lutsk? ``While other celebrities earn snickers for their unconventional choices,’’ Wattenberg says, ``nobody's laughing at the Jolie kids.’’ Except us, and every other normal person.

--Gordon Cobbledick. Classic coupling of one common name and one fabulous name. Bonus points: Gordo was a baseball writer back in the day.

--Singeng Balwinder. Yes, more sophomoric humor. And a pronunciation issue. Sometimes you just hold your nose and pull the lever.

--Princess Nocandy. Just imagine what the queen is withholding.
Posted by stefan at 12:21 AM